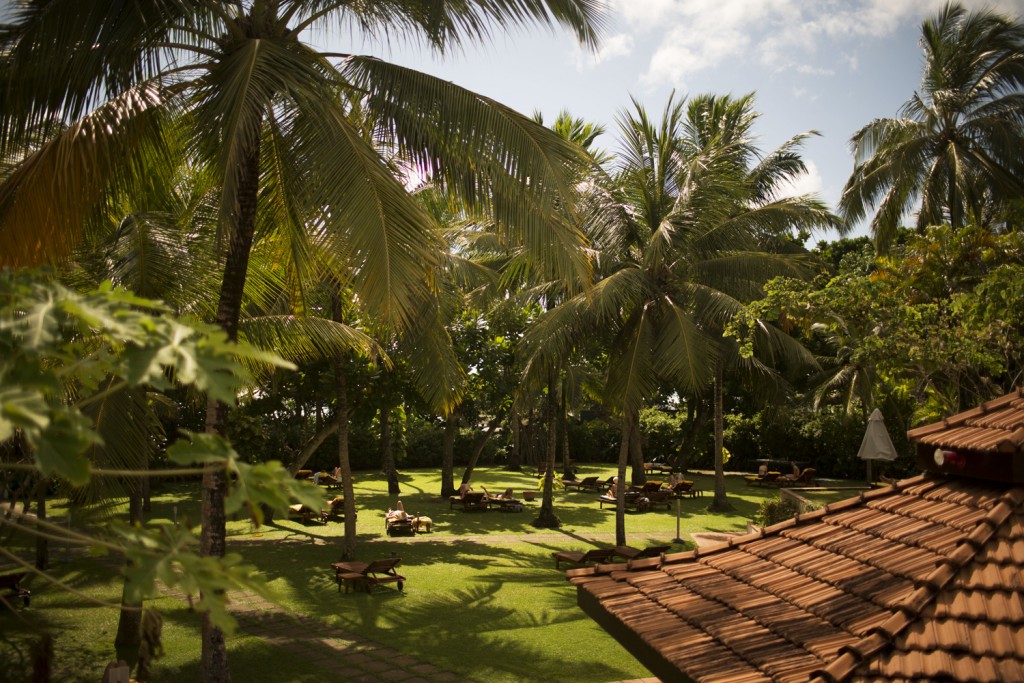 The oil palm tree (Elaeis guineensis) which can also be found the wonderfully tropic garden of the Lanka Princess Hotel is among the most important palm tree species. Originally from Africa the tree is now also cultivated in South America and South East Asia. Up to 30 meters tall the palm tree produces fruit with a total weight of nearly 50 kilograms. The tree carries 3000 to 6000 fruit.

The useful plant is originally at home in the rain forests of West Africa. There it is used as agricultural crop. Oil palm trees are first mentioned in writing in Europe around 1443 by the Portuguese see merchant Gil Eines. Then in 1763 the tree is described and illustrated scientifically for the first time. Probably via the slave route the tree first actually arrives in South America. It reached Asia in the early 19th century first being a simple decorative plant in botanical gardens. When the industrial usage of the oil was possible the large plantations took up the tree around 1900. The fruits are swiftly rotten and therefor have to be swiftly processed after their harvest. In doing so the fruits are treated with water steam in order to destroy the fat splitting enzyme they entail. Following this the fruit are squashed and the large cores are separated. The hard outsides are cracked and the seeds are dried. The flesh delivers the palm oil which is the basis of the palm core oil.

Worldwide about a third of palm oil production is used for groceries and about two thirds for industrial purposes (cleaning liquids, cosmetics, candles, bio fuel). Palm oil and palm core oil are often used in the realms of nutrition. Here palm oil is used in Asia and Africa as fat in cooking due to its excellent ability to counter heat and oxidation. Apart from this it is internationally used for the preparation of baking goods, margarine and sweets.

Palm core oil also finds extensive use in the production of margarine. It helps margarine to a buttery taste. Further, due to its melting characteristics the oil is used for cocoa frosting, for ice creme confectionery, creme toppings and fast melting chocolate fillings, toffees and caramel. Through various changes palm oil can also be made into special fats for the confectionery industry.

Further products on the basis of palm- and palm core oil are to be found in the chemical-, cosmetic- and cleaning industries, in the production of bio fuels and as fuel in power stations.